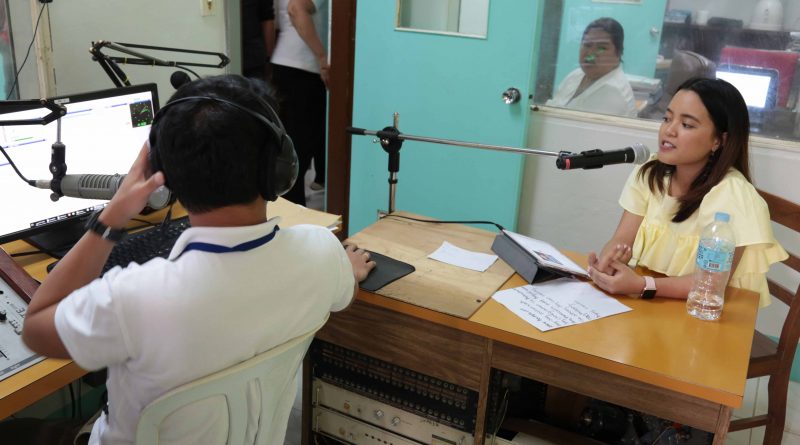 The saying “bigger is better” may not always apply, especially in the world of music. And what better example than Filipino-American broadway singer extraordinaire Kirby Asunto.

Don’t let her petite build fool you because Kirby’s packed a punch and can belt it out vocally with no problem. Kirby is back in the Philippines for a series of shows promoting Broadway and Kundiman songs in the various schools and venues throughout the country.

Five years after doing her homecoming show here in the Visayas State University and carving her name in the music industry since then, DYDC-FM 104.7 caught up with Kirby as she visits her hometown of Inopacan, Leyte. With the invitation of her relative Derek Alviola, who teaches at the Department of Development Communication, we got Kirby to perform some of her Broadway and Kundiman pieces on-air and on Facebook Live during DYDC-FM’s “Afternoon Delights with DJ Josh” on January 29, 2018.

Of course, we didn’t pass the opportunity to interview Kirby.

She first graced the limelight six years ago when millions watched her sing the Philippine National Anthem during the Manny Pacquiao-Timothy Bradley fight. Fast forward to 2018, Kirby keeps her feet grounded as she continues to do what she loves—singing and inspiring people.

Now 20 years old, Kirby talks about wanting to keep the old Filipino Kundiman songs alive, doing what she loves to do, her experience singing during the Pacquiao-Bradley Fight, on being dubbed as Charity Diva, and more.

DYDC: What influenced you to do Broadway as opposed to doing pop or other genres?

Kirby: My inspiration has always been Lea Salonga. Growing up, I’ve always loved Broadway music and acting on stage. I always advice people who want to do singing to start with classical first because it develops your voice more.

DYDC: What do you think about today’s trend in music and how young people these days listen to “hugot” songs.

Kirby: It’s also good to promote “hugot” songs. But some of the things I notice is that a lot of the millennials now don’t appreciate our Kundiman songs, our “sariling atin” music that our ancestors made back then. What I want is that they should listen to that so that generation can listen to more of that. I want to promote that and what I’ll be singing are Kundiman songs and I hope they’ll appreciate that.

DYDC: You pretty much started your singing career after being invited to sing the Lupang Hinirang in the Manny Pacquiao-Timothy Bradley Fight in 2012. Tell us about the experience.

Kirby: We actually just came there just to have a picture taken with Tito Manny (Pacquiao) and all of a sudden he asked me to sing in his hotel. Long story short, he asked me three months before the fight to sing the national anthem. It’s been an amazing journey so far because it has opened a lot of doors for me like releasing my own song “Exist” and receiving an award.

(In 2017 Kirby was a recipient of the 9th Ani ng Dangal Award of the National Commission for Culture and the Arts (NCCA) after being awarded internationally as Best Music Video of the 6th International Film Festival Manhattan a year earlier with her song ‘Exist’.)

DYDC: What was it like singing in front of thousands of people in the boxing venue and knowing that you are also seen all over the world?

Kirby: Of course it was nerve-wracking because the whole world is watching you. The whole Philippines is watching you and judging you so you have to do your best. It was tough because it’s difficult to hear yourself inside the ring and people rooting for the other guy are also booing you. But it was fun!

DYDC: We’ve read somewhere that you were also called the Charity Diva. Why was that?

Kirby: My mom and I have always supported a lot of Filipino organizations back home and we would always donate a lot of my concert earnings to some cause. It is something to give back to because God gave me this singing and you also have to give back your blessings.

DYDC: Do you still feel nervous whenever you perform?

Kirby: Of course. My secret is that I put lotion, a lot. And I sweat a lot. If you are not nervous, then you’re not doing what you love.

DYDC: What is your advice to people who want to make a career in singing?

Kirby: If you want to pursue singing, you have to deal with a lot of people that’s going to put you down. And you must always have to pray a lot. Just do it. If that’s your passion, just do it.